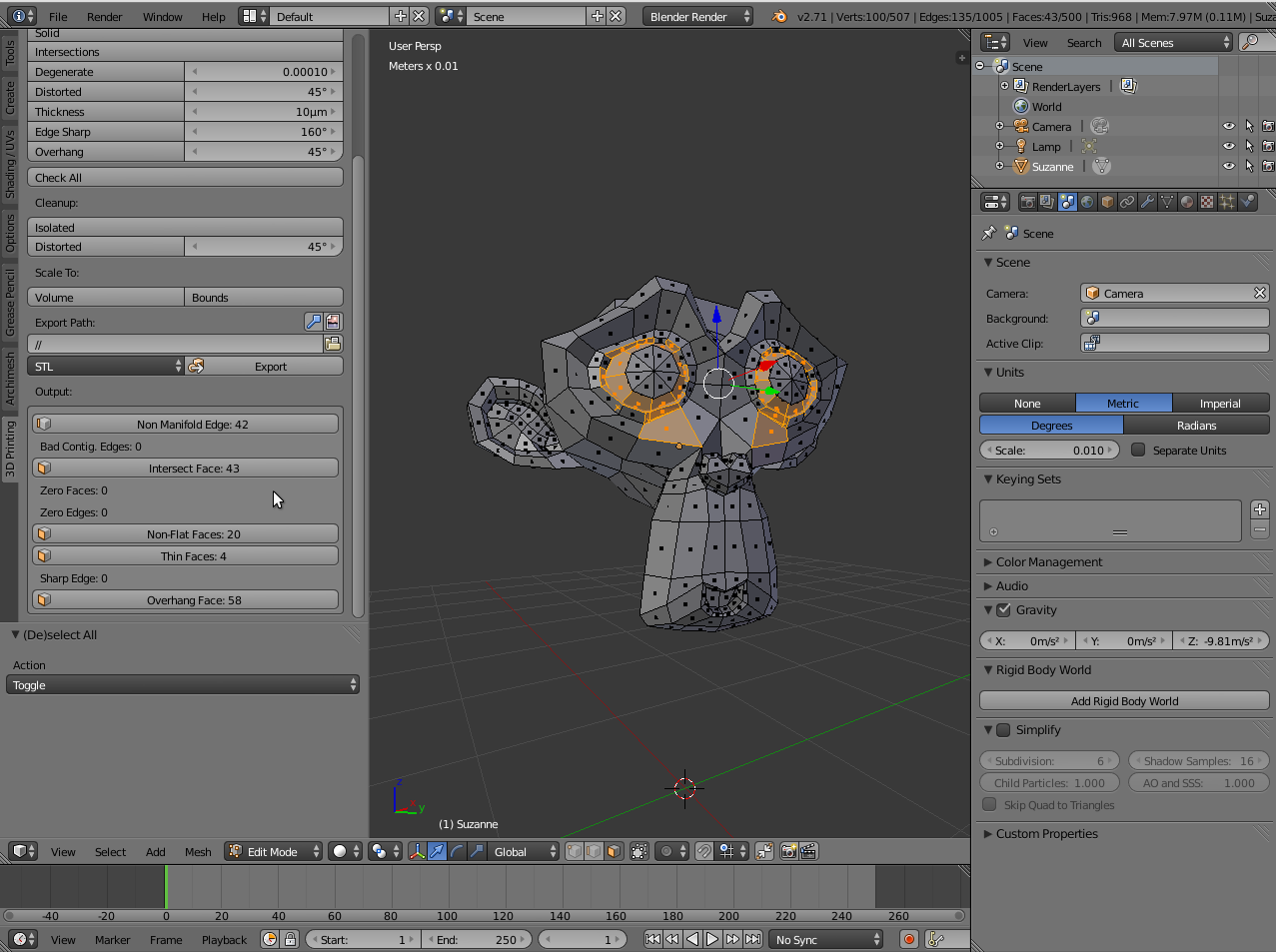 Blender was born as 3D modeling and rendering software, but it can also be used for create (or repair) 3D printable models. Here you can find a list of modifiers, addons and tools that you can succesfully use.

The Solidify modifier allows you tu add a thickness to an object; this is a foundamental requirement for a mesh to be printable. Moreover, Solidify can solve the “non-manifoldness” problem, because one the reasons that make “non-manifold” a mesh is the absence of a minimal thickness.

This modifier change the shape of all faces of a mesh, making them triangular (this is very useful for the 3D printer); anyway, the shape of the object does not change. You can obtain the same result selecting all the faces in Edit mode and pressing CTRL T, but if you use the modifier you have a few more options (for example, in recent release you can choose how to triangulate the mesh; see here)

Bevel modifier is useful to avoid “star junction”, that is vertices connected with too many edges. You can find these vertices with MeshLint tool (see below). After you have found these vertices, you can add Bevel modifier, click on “Only vertices” option and Apply, leaving all other settings as by default.
This is the result:

Now let’s talk about addons. The first thing to say is that both the 3D Printing Toolbox and MeshLint just show problems, but cannot solve them automatically (like –in some cases– NetFabb). It is also true that these instruments are really helpful for the user, because they show which faces, vertices or edges have problems. Anyway, Blender has adequate instruments to solve them “manually”. Let’s see how.

Probably the most important add-on. Clicking on “Check All” a full scan of the mesh will be done; the result is shown in “Output” panel. This panel has several schedules, and each one is about a specific problem; you can just switch fo Edit Mode and click on one of these buttons to see problematic faces/edges/vertices (in the example below i clicked on “Intersect faces”)
I must say that the 3D Printing Toolbox is even “too much” precise; I mean that not all the problems that it shows are lethal for 3D-printing; you do not have to work on the mesh until all buttons are zero. If you want to have a more realistic check, use NetFabb Basic.

Similar to the 3D Printing Toolbox, MeshLint is placed in Object Data, in the Properties Window. It checks 5 things:

–Tris (triangular faces; as we said, this is not a problem for 3D printing)

–Ngons (faces with more than 4 edges). In order to reduce the number of ngons, you just have to merge faces; in the example below, I selected the 2 halves of the upper face of the cube and I pressed F; then, I repeated the operation with the front faces. As
you can see, the number of ngons decreased from 8 to 6.

–Non-manifoldness. You can select non-manifold faces/vertices/edges with the shortcut CTRL+SHIFT+ALT+M. To solve the problem you can try to add Solidify modifier, as we saw, but there is another thing you can do: Remove doubles (CTRL V and select Remove Doubles, or even in the Tool Shelf, in Tool panel). This command identifies all vertices that are “close” to each other (you can set the default distance manually, in order to determine when 2 or more vertices are “too close”) and delete them.
The distance can also be set with Mesh→Vertices→Remove Doubles.
Removing doubles vertices can be the winning solution in many cases, for instance rotation solids.

–Vertices with more than 6 edges. See above.

This is a “simple” instrument that you can find in the Tool Shelf, in Shading/Uvs panel. Sometimes it may happen to have a mesh with inverted normals (normals are vectors that indicate which is the front and which the back of a mesh); Blender allows you to invert or Flip normals.

Let’s Get in Touch