Welcome into our dream.

Open your eyes. This is a dream that becomes material. A dream that you can touch.

Do you recognize it? … It’s your dream. And we want it to come true.

We have always believed in human inventiveness, as the only irreplaceable powerful motor to generate progress. In every idea lies a potential world, in every idea we look for new answers to questions that beset the very existence of the human being.

We are inspired and recognize ourselves in this words of Victor Hugo:

“There is nothing like a dream to create the future”

From dream to matter there is the art of Making.

We are artisans of matter. We mix dreams to produce reality. We have this goal in our mind : making more accessible the advanced technology to anyone who needs it, because we want to be part of that humanity that shares and disseminates knowledge, to improve the existence of a community from the school, to the professionalism and buisness. We cannot forget that human beings will always need to dream, or there will be no future. Today our dream comes true and we’re proud to present it to you. Here it’s our new start towards the future:

Now we are ready for your dreams.

Zero is a 3D printer FFF- Fused Filament Fabrication- that mix together advanced technology with the facility of use. We couldn’t ignore the difficulties of many user when they need to interact with a 3D printers and, focusing on this issue, we developed our solution. Zero is designed to simplify and speed up the interaction between man and machine. We have adopted a system of auto-calibration because we know perfectly that this is one of the most challenging operation that the users have to faced. We have equipped this 3D printer with a systems that significantly reduce the risk of failure of the printing process. With the 3D printer Zero we want to meet the needs of makers, professionals and anyone who has dreams and ideas to be realized. We’ve heard you and we have given to you a concrete response that you can try.

Siaren is the most intuitive user interface we’ve ever developed: four main icons group all the features available to allow the user to access the commands quickly and easily. No knob, no click, the 3.5-inch touch screen display will allow you to handle everything with the touch of your finger. The Siaren interface has also been updated to version 2.0, an improved version and mix of functionality, aesthetics of the system and symbolic dimension.

The buttons and the icons created have graphics that try to make sense of the feature they refer to, even though they are not too far from the basic models with which conventional commands are conventionally identified in 3D printing.

The temperature setting screen has been changed, now using a numeric keypad you can type and set the desired temperature directly.

The axis axle command has also been improved, enabling now the choice of different orders of magnitude for the movement of both axes and extruders.

The bulb icon has been enlarged and flanked by the reset button icon that allows you to stop the job at any time. A new feature introduced in the Siaren 2.0 is that for screen lock, pressing the padlock icon disables the screen by asking for the unlock code to be inserted.

Finally, at the top right of the screen, the icon of the Filament Guardian has been inserted, which, from ignition, allows you to see if the filament is present or not, in fact, if the filament does not have a red x placed above the filament, An icon will indicate the anomaly.

Just the time to start

The 3D Printer Zero is equipped with two system of calibration:

Ther first performs  an alignment between the hot end and the print bed thanks to the three motor of z axis, the second performs a  compensation of the different workplace heights by measuring on a nine-point grid made with a contactless inductive probe.  As you turn on the 3D printer you will be able to print without any procedure of calibration

If requested.it is possible to equip the 3D Printer Zero also with a dual extrusion system.

We have chosen for the movement of the X and Y axis the Hbot system, a system driven by two stepper motors, which each menage a belt, in order to allow the Cartesian movement of the extrusion’s apparatus. It was also implemented a changed: instead of having the motors directly connected to the belt, it is inserted a moto-reduction which allow to have high speed without loss of steps.

We have chosen for the movement of Z axis three stepper motor that move three trapezoidal rod with a maximum resolution of 5 micron. Thanks to this the 3D printer Zero can reach the layer resolution of 20 micron.

The filament ends but not the printing

If the filament ends, Zero 3D printer know it and save the printing process – refill the filament – and then restart.

Interrupts. Stops . Resume whenever you want

The failure of your printer will never be cause by electricity outage:  the 3D printer Zero know if it is without power supply and save the printing process. This system permit the management of the printing process, it can be in pause or arrested and resume it later.

The elegances and curves of this 3D printer could only be draw from the black. We designed a frame with soft lines, related the roundness of its name, which suggests a continuity between the high quality of its performances and the quest for a clean and minimalistic design. We have added three window panels, made in hot-orange plexiglass, to the total black as contrast. Thanks to this, it is possible to see the inside of the 3D printer and you could appreciate it in every phase of the printing process. 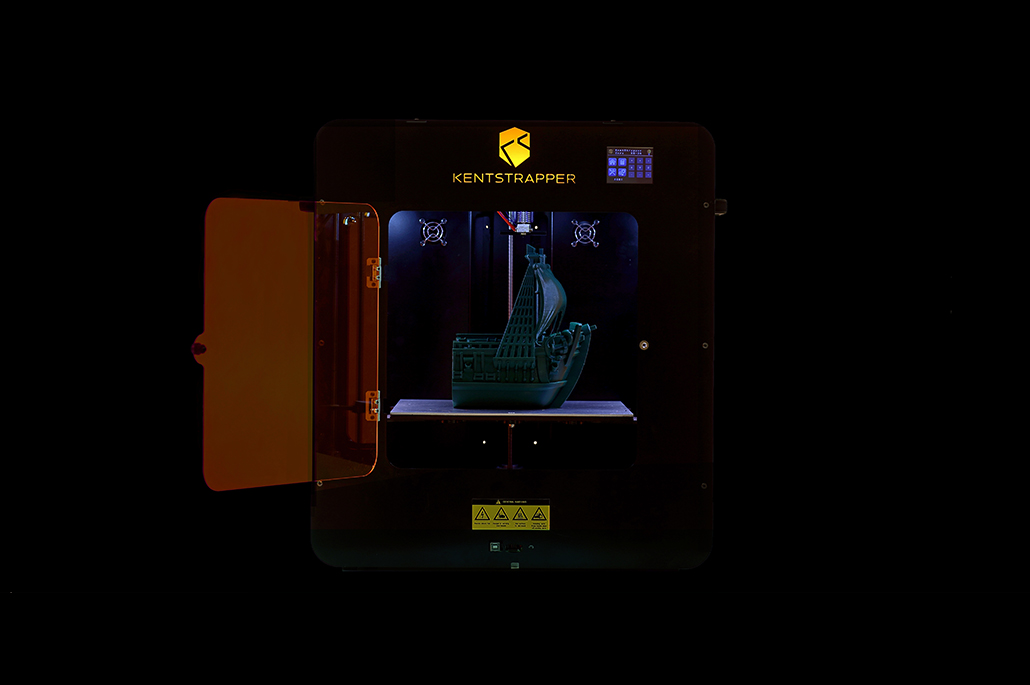 We invite you to discover and to appreciate the attention of details, like the illuminated frontal logo and the spool holder with our logo. Zero have a taste of a futuristic object, an elegant and technological design combined with a lasting beauty craft.

The 2,8 inches display is situated in the front of the Zero 3D printer with a 30° inclination to simplify the view and the use. 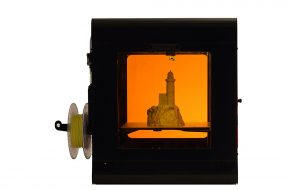 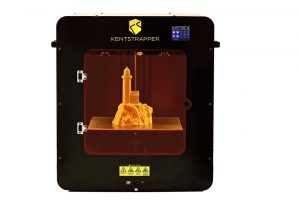 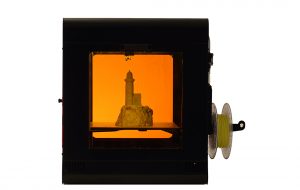 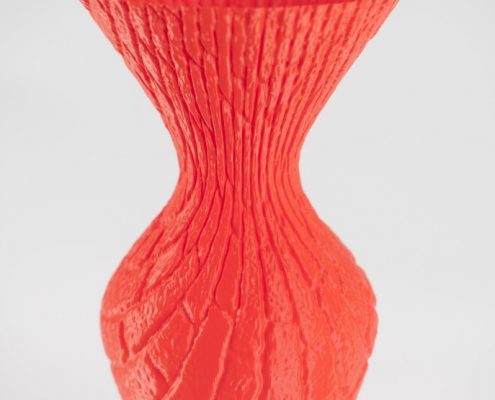 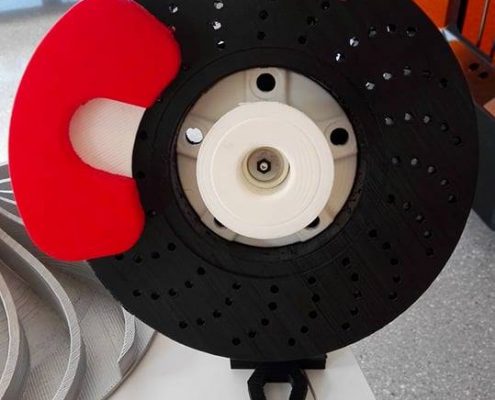 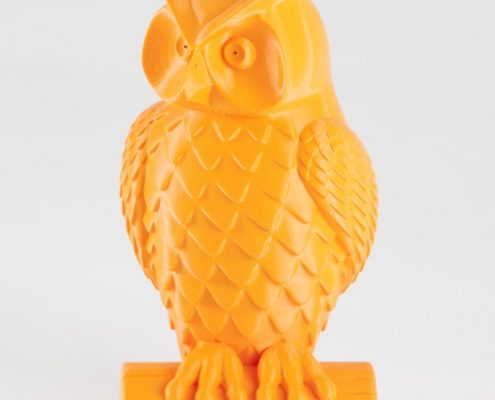 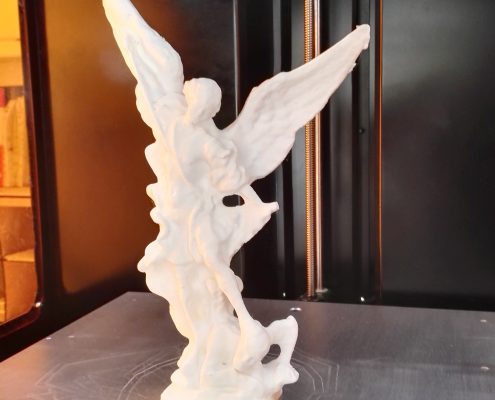 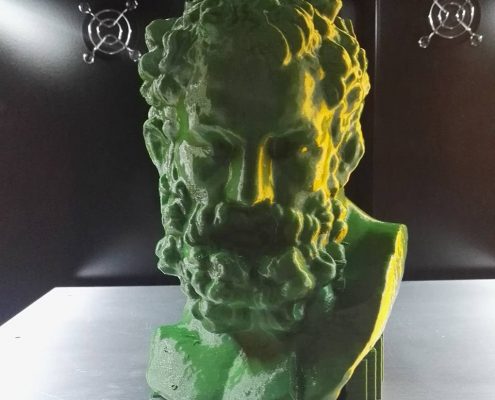 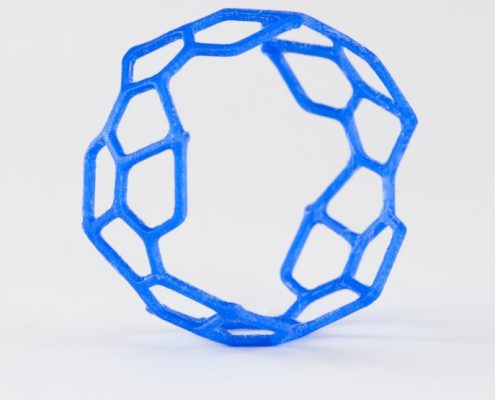 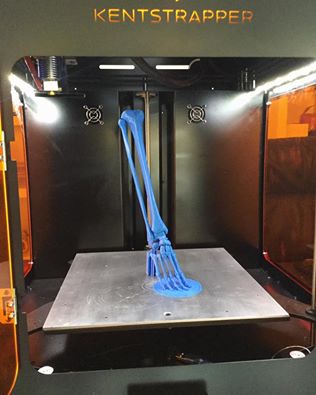 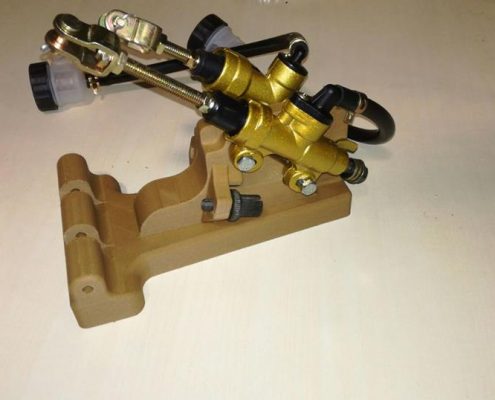 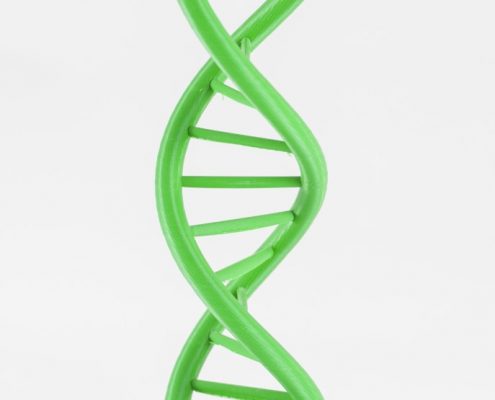 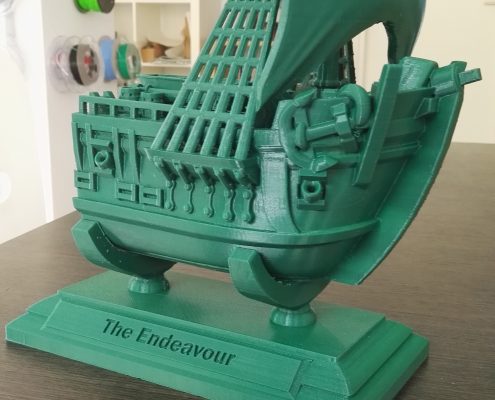 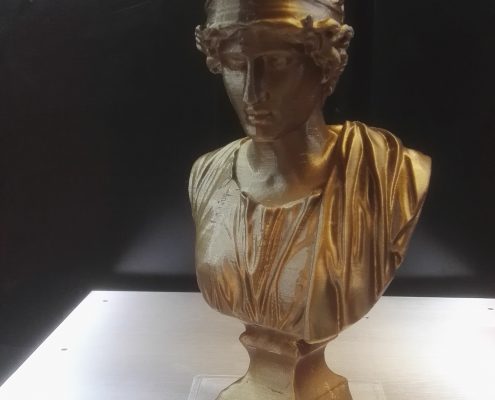 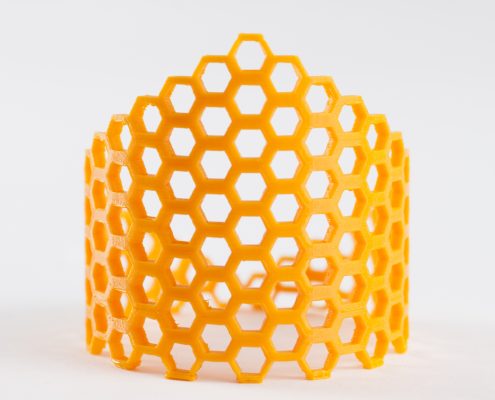 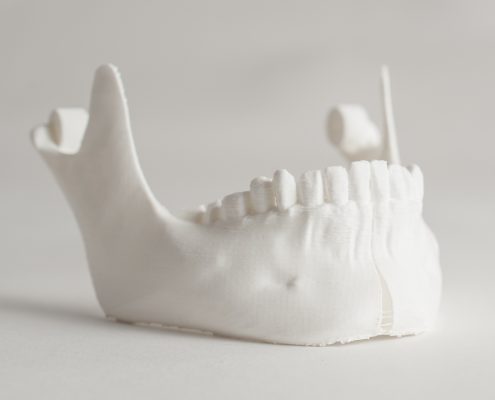 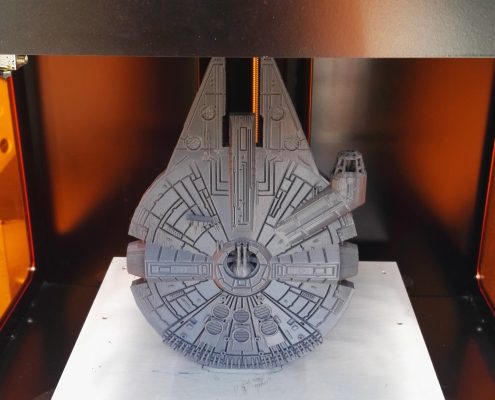 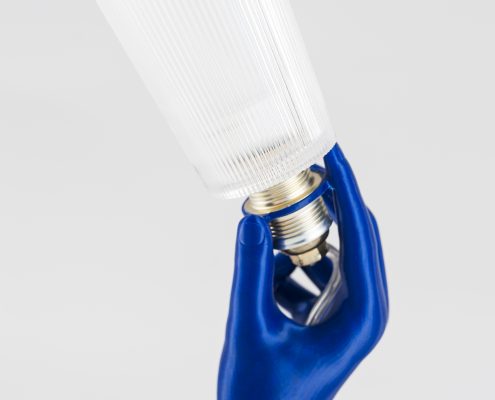 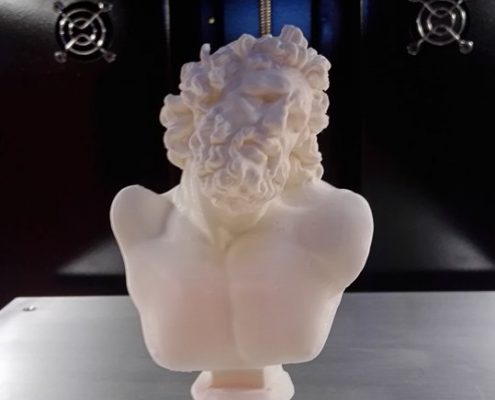 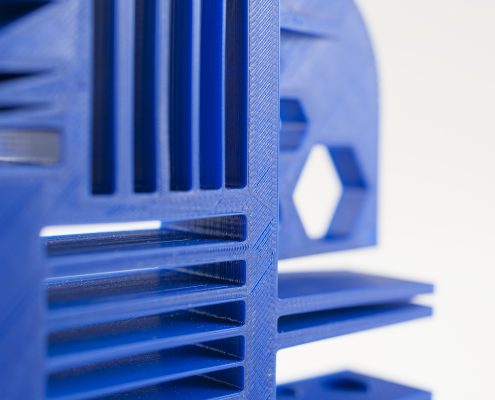 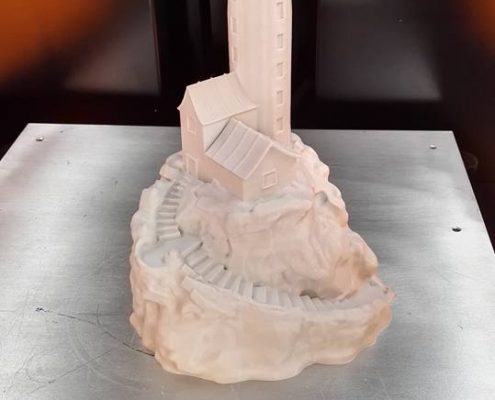 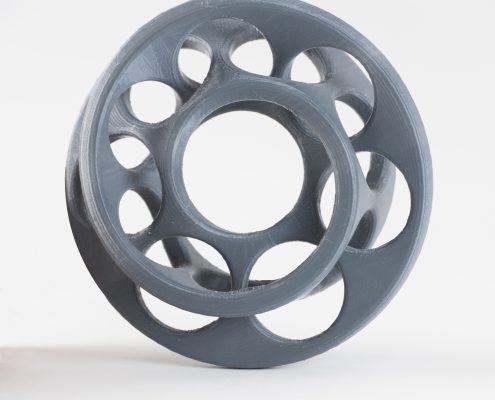 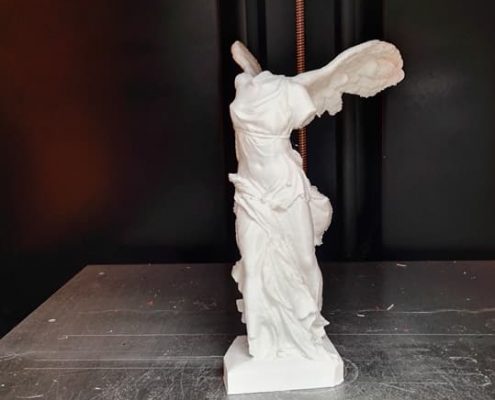 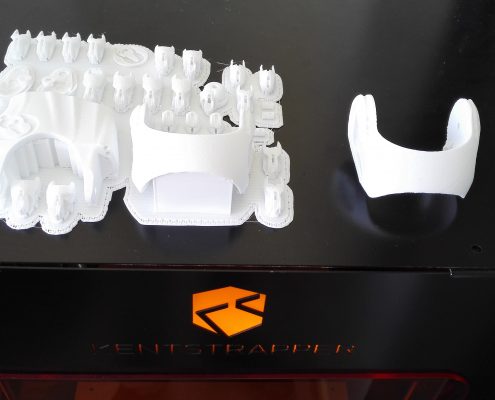